The super sour sensation that makes our mouths feel like they are going to bolt from our faces is the product of simple science. The same chemical ingredients that give fruits like lemons and lime their natural kick are also the ingredients causing the sour explosion in candies like our Sour Mania Lollipops, and they are the food additives citric and malic acid. 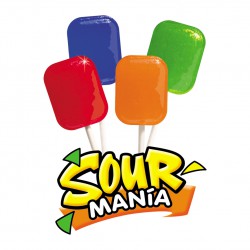 Citric acid helps to prevent food from spoiling, and it also helps food retain its artificial coloring. Malic acid, most commonly found in green apples, cherries, and tomatoes, is used to counter the tartness of citric acid in most sour candy. To keep the kick alive, hard candy makers often add fumaric acid for longer-lasting flavor.

Have you ever wondered what causes the kick behind cinnamon sour candy? It’s actually an ingredient called cinnamaldehyde, an oil that is naturally occurring in cinnamon. When this ingredient is extracted in large amounts, it creates the bursting tangy/tart cinnamon flavor we’ve come to know and love by awakening the TRPA1 protein in our mouths. This protein sends a warning signal to our brains, alerting us to sour substances. Isn’t food science fascinating?

Share the science behind sour candy with your classroom, PTA, neighbors, or own children this week. We guarantee they will find the explanation to be interesting! And you never know; the blog post might inspire a new fundraising event, as many adults and kids love exciting, sour-filled tastes!