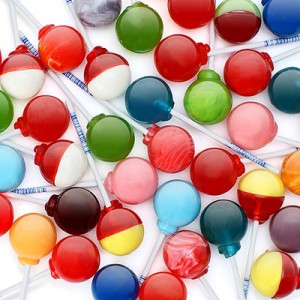 Remember the carefree days of childhood when we ate candy all day? They used to call it the “all-day sucker.” Yet only a small percentage of children were obese. In fact, it was almost unheard of. Maybe it’s time to put some candy in your diet!

Kids ran through the neighborhoods with lollipops in their mouths—so much so, the lollipop makers created the safe stick—a looped, rope-like handle. These loops eventually would evolve into straight paper sticks, like those you see on Yummy Lix lollipops today. Naturally, children a generation ago ran and played in the afternoons, moving a whole lot more than just two thumbs pressing the keys of a video game. But a lot more children today are involved in organized sports, too, getting more prescribed and scientific exercise.

So, what’s the difference? A generation ago, children ate hard candy. While hard candy certainly contains sugar and therefore calories, there are no calories from fat.

Yummy Lix contains only 110 calories per gourmet lollipop, and no calories from fat.

A lollipop or piece of hard candy takes time to break down. Kids can spend as long as 20 minutes licking down a 110-calorie Yummy Lix gourmet lollipop In contrast, they can devour a 250-calorie candy bar or bag of chips in about the same time it takes them to inhale. Study after study shows that fullness takes a few minutes to register. So the slow mouth-melting of the lollipop or hard candy is ultimately more satisfying to the snack craving. In the time it takes to consume one Yummy Lix lollipop, a basket of calorie-laden, fat-filled, unhealthy snacks can rack up hundreds of calories.

Several studies have demonstrated that hard candy eaters weigh the same, or even less, than people who do not eat candy. Their body mass index varies little from non-candy-consuming Americans.

One study that tested more than 15,000 American adults discovered that people who ate hard candy consumed more calories, but did not have a higher weight or body mass index.

To compliment the study on adults, a study of more than 11,000 American children and youth gave even more evidence that candy not only did not add to weight, but the kids eating hard candy actually were less likely to be overweight than the non-candy eaters.

It has long been proven that diets that are too limiting rarely work. The addition of relatively low-calorie hard candies and lollipops, such as Yummy Lix, can enhance the feeling of getting a sugary treat while maintaining low-fat diets. The longer eating time required to consume hard candies can also increase the feeling of satisfaction.

And they keep your mouth busy, too! Often, a quick candy can salvage the temptation to dive into a pint of ice cream or to wolf down a super size candy bar.

Maintaining weight is all about balance and moderation. Using hard candies and lollipops can be part of your solution for better health—and enjoyment.

As we say at Cima Confections, creating Yummy Lix Gourmet Lollipops is really about creating smiles.


Oops! We could not locate your form.