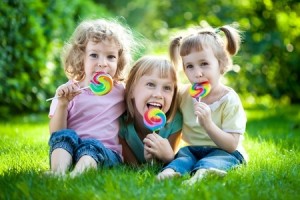 While Yummy Lix Lollipops have been available in the US since 2003, the lollipop itself has been around for many more. While we can’t be quite sure who invented the first lollipop, it is clear that this candy treat has been enjoyed by children and adults alike for hundreds of years.

While these first lollipops were very different from the treats we enjoy today, they had one important thing in common: A stick. Archaeologists believe that a variety of ancient civilizations, including China and Egypt, candied foods by dipping them in honey, then serving them on sticks for easy eating.

Lollipops became more like the candy we know and love today in 17th century Europe when the English began boiling sugary treats and selling them on sticks. A soft version of the modern day lollipop, these candies were sold by street vendors throughout London.

In the years leading up to the Civil War, children enjoyed sugary treats placed on the ends of pencils, which looked very similar to the candy we now call a lollipop. Then, in 1892, a man by the name of George Smith began putting hard candy on a stick, officially inventing the first modern lollipop.

The Naming of the Lollipop

It wasn’t until 1931 that Smith finally patented the word “lollipop” to describe his candy. This patent didn’t last very long though, since Smith’s company closed during the Great Depression, making the term “lollipop” a part of the public domain.

Since it’s naming in the early 1900s, the lollipop has become a candy favorite for families. Now created in a wide array of shapes, sizes and flavors, lollipop are a delicious treat on any occasion. With 20 mouth watering flavors, enjoy a Yummy Lix Lollipop today!