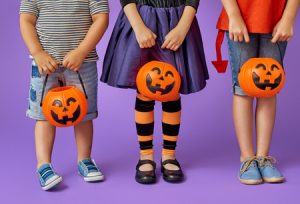 According to Forbes, Americans will spend $9.1 billion dollars on Halloween candy and décor this year. That’s a lot of candy! The interesting thing about this is that many families across the country celebrate Halloween without really knowing much about where the “trick or treat” tradition came from.

Here’s a brief look at how candy is inextricably linked to the American tradition of Halloween:

Halloween actually started as an ancient Celtic festival, when the poor people of Great Britain and Ireland took part in a “soul cakes” ritual. These families would sing prayers that honored the dead in exchange for these baked delights. Historians have pegged this tradition as “souling”.

In America, the tradition was just beginning to uncoil, but the emphasis quickly shifted to the “tricking” aspect of the holiday, rather than the treating part of it. This was the only time of year that communities tolerated the mischief of young children, who liked to play pranks on their neighbors.

During the 1920s, homeowners would entice children with sweet treats in exchange for the security of their properties, and the children, more often than not, would oblige for the sake of satisfying their sweet tooth. This was also another way for communities to come together for family fun.

The candy retail market wasn’t surging with a demand for Halloween candy until the 1950s. During the 1920s and 1930s, candy retailers earned the bulk of their sales from Christmas and Easter holidays. During the 1950s large brands like Kellogg and Kool-Aid tried promoting non-candy products as Halloween treats, but the campaigns didn’t really stick with consumers. On the opposite end of the spectrum, candy companies went full force with marketing smaller candy bars and bags of candy corn and were met with success.

Halloween will be here sooner than we think, to prepare for this holiday, order your treats in advance! At CIMA Confections Corp, keep the Halloween tradition alive in the design of our Lolliween pops, which make a great trick or treating handouts!