What is going into your stockings this year? How about Merry Pops Lollipops? Every year, the stockings are hung by the chimney with care…and it is up to you to fill them to the brim with all of the good things your family loves. Tradition dictates oranges, but how about a different kind of fruit? Your stocking hangers may like Yummy Lix orange-flavored gourmet lollipops shaped like a Christmas Tree or a Snowman or Santa himself! 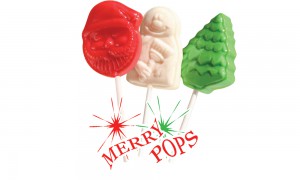 The tradition of oranges traces back to the third century, when a wealthy orphan named Nicholas dedicated his life to the church. His prosperous parents were wiped out during an epidemic, leaving the young man alone with his faith. A true believer in the Biblical message to give all you have to the poor, Nicholas sold everything he owned in order to live simply and give generously.

He also believed the Biblical dictate to keep gifts between God and giver, and not to show off. To remain anonymous, he often delivered his gifts late at night. His sly delivery sparked the legend of a present-bearing benefactor sneaking down the chimney after the household had tucked into bed. Over the centuries, this premise has provided weary parents with a valuable weapon to enforce early bedtimes!

One day, a villager in Nicholas’ hometown of Patara lost his wife to a sudden illness. As the man mourned her loss, he also grieved for his three beautiful daughters, who would not have dowries for their weddings. Without dowries, there would be no grooms. And this was not a man who would accept charity.

Nicholas, now the Bishop of Myra, knew the family and looked for a way to give the father hope. He came by late one night and saw the girls’ stockings hung over the mantel. Some legends say he slipped gold coins into the stockings; others say they were gold balls. The girls could now marry!

Word of the miraculous gifts spread and children began hanging their stockings, back then their socks, over the mantel in hopes of goodies. The legend grew of a man now known as St. Nicholas, or Santa Claus, who would slide down the chimney and fill the stockings.

Oranges traditionally represented the gold balls some believe were left for the girls, insuring them a beautiful future. A rarity before modern times, the oranges were treasured treats. The succulent fruit brought sweet taste, and also the vitamin C needed for good health in the cold of winter.

You can start your own Christmas tradition with Yummy Lix Merry Pops. But you don’t have to stick with orange, you can choose your allergen-free Santas, Christmas trees and snowmen in Bubble Gum, Cherry Lemonade, Green Apple, Strawberry, Orange, Red Raspberry, Grape, Watermelon, and Wild Cherry.

Today, children all over the world hang their stockings up in anticipation of good things—small toys, candies, ornaments, and even money to be found Christmas morning. From Cima Confections, we wish you a Merry Christmas and a happy New Year!