Today, just hold out your bag and shout the traditional greeting: Trick or Treat! Homeowners respond and in the bag fall candy bars, bubble gum, 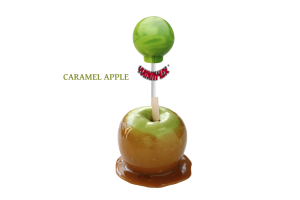 gummy bears, and lollipops like Yummy Lix. But in the olden days, to get your treats – you played your tricks first! Throughout the history of Halloween, those seeking sweets and treats had to perform a task – tell a joke, sing, or dance to entice the person at the door to share a cake or fruit.

The ancient Celts celebrated Samhain (pronounced sah-ween), the night when the two worlds collided – the world of the living and the world of the dead. During that time, supernatural beings traveled the earth: fairies, ghosts, goblins, and demons. Just in case people might run into such a creature, they would sometimes wear masks and disguises so a malevolent specter would pass them by, thinking they were kindred spirits. Jack O’ Lanterns served the same scary purpose.

Bonfires were lit and banquet tables spread with tasty edibles to placate the evil spirits who might not be so easily fooled. Food was left in the home in case an ancestor came back from the afterlife with an appetite. It’s a big temptation to leave out good food around hungry youngsters, and people haven’t changed. Clever villagers began using their disguises to go after the goodies for themselves! To procure food and drink, these celebrants, called mummers, would sing, dance, act out plays, and amuse with general horseplay.

After Christianity spread to the Celtic Isles, Samhain was transformed into All Souls’ Day, which honored the dead. Mumming with merrymaking morphed into a day that exchanged prayers instead of tricks for treats. Poor people would visit wealthier homes and ask for pastries called soul cakes.  In exchange for the treats, they promised to pray for the souls of the benefactors’ lost relatives.  Children took up the practice and went door to door asking for gifts of food, coins, and ale.

Young people adopted Halloween in Scotland and Ireland to bring back the fun. They called it “guising.” These partiers focused on the living rather than the dead – performing tricks such as jokes, songs, and dances. Wearing fancy dress and masks, these Halloween celebrants went from house to house looking for a merry way to collect sweet treats and laughs.

Today, children can dress up as superheroes, cartoon characters, princes, and princesses as well as witches and skeletons. Some may go to parties, enjoy fall festivals, or roam the neighborhood celebrating this ancient holiday. Instead of telling a joke, the joke would be on the household if candy is withheld! While tricks are rarely played on Halloween anymore, they remain part of the tradition of this festive holiday. 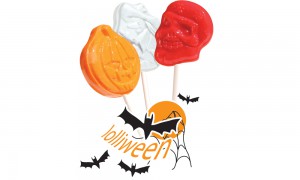 Candies such as Lolliween gourmet lollipops celebrate the ancient roots of Halloween with fun jack-o-lantern, skull, and ghost shapes. You can please your trick or treaters with these ghoulish pops, while providing a treat parents can appreciate – Lolliween lollipops are hypoallergenic, slowly release sugar to minimize hyperactivity, and the hard shell is very difficult to tamper with. Play it safe while still having a happy Halloween with Lolliween or Yummy Lix gourmet treats. And there is no trick to getting them! You can order Lolliween lollipops right from the Cima Confections website for your fall festival, neighborhood party, or just to share with your neighbors.